The human body is humbling to say the least. Each system waits patiently on a signal from another to step in and do the job it was created for while simultaneously protecting itself and one another from foreign attack or harm.

Nothing puts this beautiful bodily synergy on display quite like having food poisoning.

My husband I spent the last few days in various positions around our home using various housewares in ways they weren’t intended. All thanks to some fourthmeal chicken masala from the good old Whole Foods bar. Yes I called. No the manager did not say “Oh sister we are so sorry here’s fifty bucks for groceries.” And I would be lying if I said my misery didn’t bring thoughts of suing them to my mind more than once. We have been OUT of commission. Even still we’re limping around parenting by television and grimacing with every hunger pang in fear of what might happen if we actually give into them.

I’ve had Mono, I’ve had multiple oral surgeries, I’ve broken bones. Guys… I went through a 96 hour detox with hallucinations and symptoms that felt like what I imagine the battle of the end times will look but I kid you not, all sacrilege aside- right now, the powerlessness and fear that struck with this bout of food poisoning feels worse than that detox. I told you, I am humbled.

The fact that my body recognized something was trying to harm it and essentially poisoned itself in order to flush it out is powerful. There’s no way around it.

So it makes sense that as I was holding a cooking pot on my lap, sitting on the toilet at 4am while trying to find ways to stop the charlie horse in my abs from the involuntary contractions. . .  a deep and terrifying sense of dread filled me. I knew we’d make it through but I didn’t know how we’d make it through while parenting a 14 month old. I was overcome with fear of what would happen when we woke up. Which he did around 6am. So I dragged myself into my kitchen with waves of nausea following me and fill his bottle with held breath because the scent of cow’s milk was threatening to push me over the edge. I took a deep breath (away from the milk) gathered my remaining resolve and went into his bedroom to give him the bottle and check the status of his diaper. Naturally, it wasn’t just urine also naturally, it wasn’t solid. He’s teething and has been decorating his diaper with abstracts for the past week. By the grace of God I make it through cleaning him up, getting a new diaper on him and shutting his door. I make it to my bedroom and stand there long enough to make the saddest and most defeated expression I’ve ever made at my husband, before running to the kitchen for another pot and back to the bathroom. 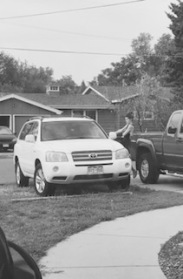 By the time I made it back to my bed it was 7 oclock. Not five minutes later I receive a message saying “What can I do to help? Need me to take Banks for a bit today so you guys can rest??” I can only describe the relief I felt reading those words as an immediate sense of feeling clean. Likely because I was so disgusting but regardless, that brief message had actively refreshed my soul and body with hope. This girlfriend came over, dropped off medicine to stop our vomiting, installed my son’s carseat in her vehicle without our help, left to get saltines, electrolytes, sprite, and vitamin water and returned when Banks woke up to whisk him off for a day with his buddy Leah.

This paramount act of obedience and good will. . . no, lets call it what it is, this act of LOVE offered my husband and I the opportunity to rest, recuperate, and recharge. We slept the majority of the day waking only for crackers, sips of water and pedialyte popsicles which made it possible for us to pick him up around 4pm and make it through the last few hours before bedtime.

In my sickly stupor I did what I normally do and analyzed everything in my life, I can’t help it. Well, I’ve continued to these past few days. When my girlfriend Julia stepped up and took Banks without a second thought and when countless other friends reached out and offered to bring food or watch Banks or just to help in any way they could, I couldn’t help but see a glaring parallel to what our bodies had done to protect themselves in the first place.

These systems we’ve built around our family, these people who reached out with varying acts of LOVE seemed just to be waiting for a signal so they could step into their designated role to protect us, provide for us and to heal us. Left to my own devices I would’ve carried the weight of resentment and frustration that we don’t have family nearby if we’d have been forced to parent paralyzed that first day. Even if someone offered to take Banks and I did my usual “Oh you don’t have to” junk- and they let me- I would’ve surrendered myself to negativity, doubt and fear of what the future will hold in a time of need. But these systems around us don’t fail.

Instead, Julia did her work in treating our symptoms and giving us the space we needed to regain composure. Then words and love from so many others brought laughter and warmth keeping our gears grinding when fear and isolation tried to lock them stiff, and when the words faded, another dear friend brought every naturopathic cure known to man to rebuild our systems so that we can continue functioning and running the way we’re meant to.

This is the body. This is our body.

I hate that it took food poisoning to slow my brain enough to gaze around and see that these people aren’t here transactionally. They don’t expect anything in return. These friends have become systems which support our success as a family, one that surely would’ve survived these last few days without them but not without leaving a malignant reminder of isolation and fear of the future. Instead, they (literally) gave life.

But God has so composed the body, giving greater honor to the part that lacked it, that there may be no division in the body, but that the members may have the same care for one another. If one member suffers, all suffer together; if one member is honored, all rejoice together. 1 Cor. 12: 24b-25

Becoming a Child of God